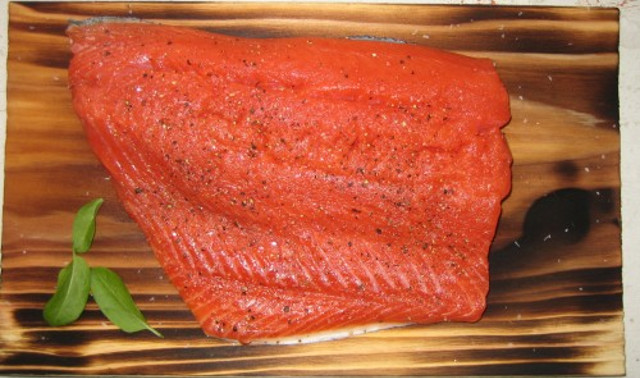 By robintekNovember 2, 2013Fish Dish of the Month
No Comments

Ed Note: Fish is not only a great source of EPA and DHA Omega-3s, but it is also a good source of protein and minerals such as zinc, calcium, magnesium, potassium, and selenium. Since most people don’t eat fish every day, our fish oil supplements are a great choice to get a daily intake of EPA & DHA Omega-3. The Wiley family thinks you should both take fish oil supplements AND eat sustainable fish as often as possible. On those days that you do have the opportunity to eat fish, we’re here to help with some recipe ideas. Enjoy!

Autumn is upon us here in northeastern Ohio. The nights are cold, the days are invigorating, and the edges of the maple leaves are beginning to blaze red. We’ve escaped frost so far, so my tomatoes are still producing, but I expect that will end soon. Snap peas are beginning to come in again, and my broccoli and cauliflower are heading.

Gardening gives you a unique appreciation for the changing of the seasons. As something comes to an end, something new and exciting takes its place. The thrill of spring lettuces and sugar peas gives way to the sharp pleasure of summer’s first tomato. You can’t imagine ever having enough until suddenly you find yourself ignoring them and watching your pumpkins with hope.

My sister-in-law, aware of my love affair with vegetables, bought the perfect book for Baby Girl’s third birthday (she’ll be in school in less time than she’s been alive, and I can hardly believe it). The book is called Sophie’s Squash. It’s about a little girl who finds a butternut squash at the farmers’ market and adopts it as her imaginary friend. Eventually it starts to rot, so she makes it a “bed” in the backyard, and, lo and behold, the next summer it produces two little baby squash. It’s a cute story and a great introduction to the rhythms of nature.

We thought it would be fun to draw a face on a squash and see what Baby Girl thought of it.

That was a mistake. She adores it. She tucks it into her little toy stroller and takes it on walks. She insists I greet it every morning. It is her most requested bedtime companion.

I don’t much like wasting food, so I tried explaining to Baby Girl that we eat squash, and that we were going to eat this one, too. At first she laughed, thinking I joked. When I insisted, her little face fell. “No, mama, No!” she sobbed. “Don’t eat my best friend!”

Suffice it to say, this autumn meal will feature no butternut squash. But that’s just as well. Squash is a wonderful and much-loved fall vegetable, but there are others that are just as seasonal and just as delicious, and, perhaps more importantly, better suited to playing a supporting role to a great piece of salmon.

The meal I’m going to walk you through here is cedar-planked Alaskan salmon with a balsamic-maple glaze, autumn quinoa pilaf, and roasted cauliflower. A more concise version of the recipe will follow.

I love this meal for several reasons. It is seasonable, fairly easy, and extremely nutrient-rich. It includes lentils in the pilaf, which help balance out quinoa’s natural dryness. It also features wild Alaskan salmon, which is, as far as I can tell, the gold standard in sustainability. According to the Monterey Bay Aquarium’s website, “pacific salmon in Alaska is among the most intensively managed species in the world, with excellent monitoring of both the fish populations and the fishery.” There’s a helpful list included that breaks down the various species and fishing methods by their sustainability.

The fish counter at our local Whole Foods is a lavish visual feast. That and, let’s be honest, their equally tempting cheese selection, are my main reasons for shopping there.

I selected the sockeye salmon, because that rich pink color is irresistible. I also picked up a cedar plank, which was, I think, two bucks, and as a non-conductive surface, helps the fish cook evenly in the oven’s ambient temperature rather than in the searing heat of a pan.

As you can see, I gave into some of Whole Foods’ other temptations.

Cedar planks need to be soaked before use. The label says two hours, but the man behind the fish counter told me an hour would do in a pinch if you use hot, salted water rather than cold. I soaked my plank in a large bowl of cold water with a heavy coffee mug to keep it submerged.

While your plank soaks, you can begin the glaze. Mince two cloves of garlic and a tablespoon of fresh ginger. The best tool for peeling fresh ginger is a paring knife, and don’t fret if you remove a fair amount of ginger in the process. It’s inevitable.

Whisk the ginger and garlic together in a bowl with a half cup of balsamic vinegar, two tablespoons of maple syrup, one tablespoon of good, seedy mustard, a teaspoon of Worcestershire sauce, and a generous sprinkling of salt and pepper.

A note on the vinegar: balsamic vinegar is one of those weird ingredients whose quality and cost varies widely. You don’t need to spend twenty dollars for an ounce here, but as it is a featured flavor, you don’t want the very cheapest either. Look for something aged and containing only wine vinegar and grape must as ingredients. There’s a good range of vinegars in this middle area that can be reduced to be thick and sweet like the higher quality products. I chose Monari Federzoni’s Aged Balsamic Vinegar of Modena, and I’m quite happy with it.

Bring your glaze to a boil in a medium saucepan, and then reduce the heat. Allow it to simmer gently for 10-12 minutes, until it is thick. Turn off the heat and strain the glaze through a fine-mesh strainer to remove the garlic and ginger chunks. You want your glaze to be thick and silky.

While the glaze is simmering, prep two heads of cauliflower. The easiest method I’ve found is to cut of the florets with a paring knife, pile them in a salad spinner, and give them a quick rinse. They can drain for a bit in there before you have to use them. Preheat the oven to 400 degrees.

Pull out a big, clean cutting board.

I love this bamboo cutting board we received as a wedding present.

Then, you’ll need to chop and set aside the following: one medium onion, ¼ cup flat-leaf parsley, two stalks of celery, and three parsnips (these can be roughly cubed). Mince another clove of garlic.

Warm two tablespoons of olive oil in a medium skillet over medium heat. Add the onion and garlic, and cook until softened. Stir in one teaspoon of whole cumin seeds and one cup of French green lentils, stirring as it cooks for a minute or two. Cover the lentils with water, throw in a bay leaf, and bring it all to a boil. Then reduce the heat and allow the pot to simmer until the lentils are soft. Mine took about 20 minutes, but cooking time depends on the beans’ freshness, so taste often. Once the beans are done, remove them from the heat, pluck out the bay leaf, and drain the excess water away. They can be unceremoniously dumped into a large mixing bowl, along with the chopped parsley, half a cup of toasted sunflower seeds, and a generous helping of salt (these are beans, remember, and beans need salt).

Then, you’ll want to warm two tablespoons of coconut oil (olive oil will work if you don’t have coconut), this time over low heat in a large skillet. In here will go the celery and the parsnips, which will need about ten minutes to soften. Add half a cup of red quinoa (Ancient Harvest is a good option; they even make a quinoa pasta, which I haven’t yet tried as I’ve only just discovered it, but I’m pretty excited to see how it is), and, like you did with the lentils, stir as it cooks in the oil for a minute. Sprinkle on half a cup of golden raisins, and then pour in half a cup of coconut milk and three quarters of a cup of vegetable stock. A bit more salt and pepper will be needed here. Bring it to a boil, then cover and reduce heat to low, allowing the mixture to cook until all of the liquid is evaporated and the raisins and grains are soft and plump. This will take around 17 minutes. Once it’s done, remove the lid from the pan and allow it to sit and air out for about five minutes before mixing it in with the lentils.

Your oven should be good and preheated by this point, so go ahead and toss the cauliflower in a baking pan with olive oil and salt. It doesn’t need to be greasy, but it does need to be covered. Put your pan in the oven, turn the heat up to 450, and set a timer for ten minutes.

While the cauliflower roasts, whisk together a quarter cup of olive oil and three tablespoons balsamic vinegar. Arrange your salmon on your well-soaked cedar plank, generously salted and peppered.

When the ten minutes are up, pour the vinaigrette onto the cauliflower, stirring with a spatula to distribute evenly, and slide the salmon into the oven. You will want some kind of large pan underneath to catch drips. They will both be done in about fifteen minutes, give or take a minute depending on the thickness of the filets and the size of the cauliflower pieces. When they’re finished, brush the salmon with the glaze and give the quinoa pilaf a good squeeze of lemon.

I hope you enjoy your meal as much as they do!