By robintekJune 4, 2014Education
No Comments

Ed Note: A breakthrough has enabled scientists to develop My Omega Blood Test, to measure the balance of Omega-3 and Omega-6 in blood so that consumer’s know that a real problem exists so they can start to fix it. The test has been used by thousands of individuals who are now able to helps them make informed dietary decisions and determine whether their dietary changes are actually having the desired effect on their omega-3 and 6 blood levels. Our regular contributor Sarah reviews this great tool for learning more about your own personal Omega-3 levels.

When I was asked to test my Omega-3 levels, I was fairly confident of the result. My love of reading and cooking has propelled me through a whole host of books about nutrition (both conventional and alternative) and has given me the tools I need to make wise food choices for myself and my family. The ideal ratio of Omega-3 to Omega-6 fatty acids is at least 1:1 (meaning that your Omega-3 levels should be equal to or higher than your Omega-6), and that’s what I expected to find. Boy, was I wrong.

But let’s back up a little bit. The test came through the mail in a tidy packet from My Omega Blood Test and was quite easy to use. 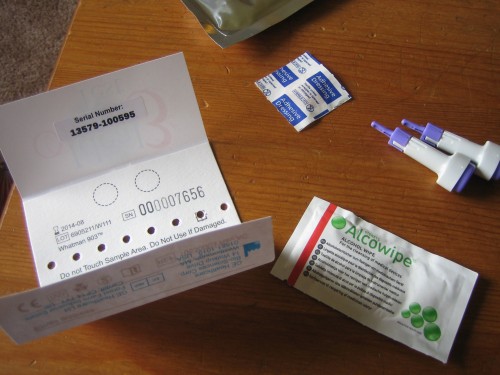 The package comes with two needles, which need to have their little purple tips pulled off before use, like so:

Then you massage the tip of the finger you want to prick (This is important to increase blood flow. I neglected to follow the instructions the first time around and so didn’t get enough blood for the test to work), wipe it with the provided sanitizing wipe, and then poke it with one of the two needles. I had to squeeze my finger a bit in order to cover the test area completely, but the whole ordeal was much less painful than getting a shot. There are two circular test areas that must be covered for the test to be accurate. 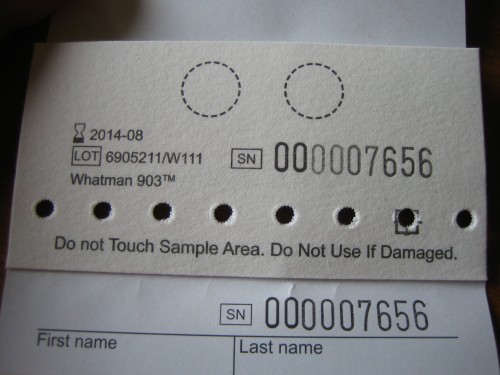 Once you’re finished, the test goes into a sealed bag which fits neatly into a pre-addressed envelope. Pop it back in the mail, and you’re good to go.

After I sent in my test (the one with the correct amount of blood – it really is important to fill the test areas completely!), I received an emailed link to a the OmegaSense test site with login information to view the status of my test. Another two weeks later, my results were emailed to me.

The report you receive after taking this test is quite detailed. The first page after the cover shows you your Omega-3 to Omega-6 ratio with a helpful graph: 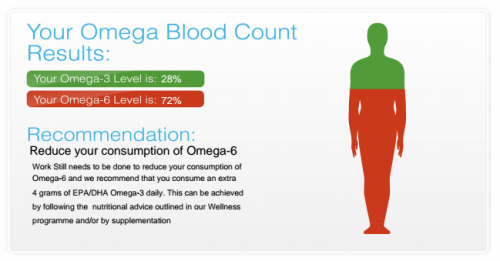 Ugh, the amount of red (Omega-6) in that picture was a surprise to me. My Omega-6 levels are nearly three times higher than my Omega-3s! This is of course discouraging, but it is also motivational, as it is forcing me to take a hard look at the reality of my eating habits. Here are a few things I have discovered:

1. I do not eat nearly as much fish as I think I do. People eat very little fish here in the States, so it is easy to imagine that because I eat more than the norm I am eating enough. That simply isn’t true. According to Dr. Frank Sacks, a Professor of Cardiovascular Disease Prevention at Harvard, in order to get my Omega-3s through diet alone, I ought to be consuming at least one serving of fatty fish daily. Eating fish once or twice a week, as I usually do, is not eating a lot of fish, and it is certainly not eating enough fish.

2. My haphazard approach to supplement-taking must go. I have a neat little row of pill-bottles on my shelf, each one of which I have thoroughly researched. But truthfully, I have no idea how often I actually take them. As is often the case with us parents, I am much more diligent about my children’s fish oil consumption than my own. They both take Wiley’s Finest Orange Burst Liquid every morning, and, according to my three-year-old daughter’s reasoning, it’s the “medicine which makes me big enough to ride my big girl bike!”

3. I have fallen further from my nutritional ideals than I had realized. To be fair to myself, we’ve undergone a quite a lot of upheaval in the past few months, from a death in family that completely changed our plans to a sudden move and an adjustment to our new circumstances. But now is a good time to put away processed foods (which are not only generally nutritionally inferior, but are also often horribly high in Omega-6 fatty acids) in favor of a return to vegetables, fruits, nuts, and fish.

Fortunately for me, the test report also comes with a recommendation page. Some of the information was new to me; some of it I knew already but had forgotten to consider when at the grocery store.

According to this report, I have two basic steps to take from here.

The first is to examine what kind of fat content I’m getting from my food. According to both the Mayo Clinic and the Union of Concerned Scientists (This is a long report, but it’s very interesting and informative, should you be inclined to read it), milk and meat from pasture-fed cattle tend to have higher levels of Omega-3s then do their conventional counterparts. Aside from just generally eating more fish, making sure my meat and dairy contain high-quality fat seems to be the most significant dietary change I can make.

The second, and, likely most important step (at least at this remedial stage), is to dramatically increase my Omega-3 supplementation. Four grams of EPA/DHA Omega-3 (the kind found in fish oil) is the recommended daily amount for someone with my blood levels. That’s a whole lot of fish oil. The easiest way I could find to consume such a high amount daily is to take two teaspoons of Wiley’s Finest very concentrated Peak Omega-3 Liquid daily. This stuff both tastes great and makes ingesting the recommend amount of Omega-3s much easier than taking a handful of giant pills. In order to track how regularly I’m taking it, I wrote the date I started on the bottle in sharpie.

I’ll continue with this level of supplementation until I take the recommended retest in November. I’m excited to see what a few simple changes in my diet might mean for my overall health.

I highly recommend testing your Omega-3 levels for yourself. This certainly has been an eye-opening experience for me, and I’m finding it much easier to make wise choices once I’ve faced the truth about the choices I’ve been making.

{This article is not intended to provide or serve as a substitute for professional medical advice.}